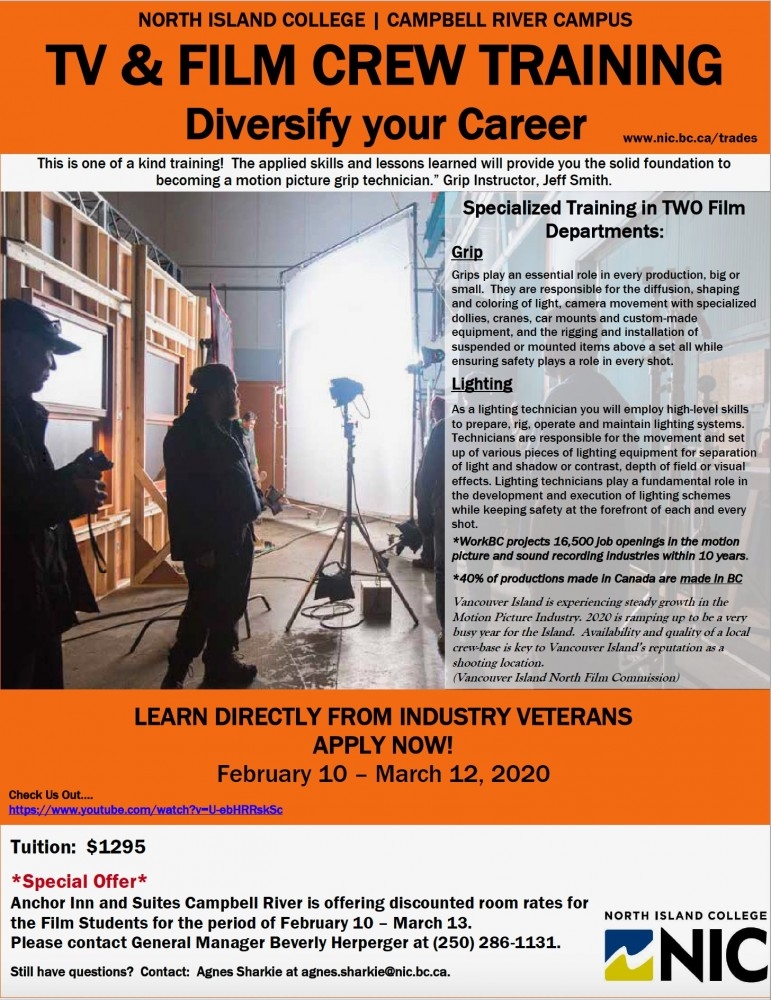 Applications are now open for the training, developed in partnership with the Vancouver Island North Film Commission (INFilm).

Industry veterans Jeff Smith and John Helme are returning to the program as instructors.

“We’re excited to be working with INFilm and industry professionals to open up additional seats for this training,” said Cheryl O’Connell, dean of trades and technical programs at NIC. “It’s a big part of fostering growth in the sector, one we’re proud to support.”

NIC previously offered grip, lighting, set construction and production assistant training in the fall and winter of 2017/18 through a pilot program that was a first for the North Island region.

Graduates of the program have gone on to find steady work in the industry throughout the province.

This year, students will have the choice of taking Grip Film training or Lighting Film training, with capacity for 22 students in each.

In addition to specialized training in each stream, students will also graduate with key certifications needed to work on film and TV sets, including occupational first aid, aerial lift safety and set etiquette and protocol.

The availability and quality of local crew has helped to enhance Vancouver Island’s reputation as a shooting location.

“It’s become apparent that as the Lower Mainland has become quite busy, we’re a really great option,” said Miller.

Vancouver Island has seen a steady increase in popularity as a shooting location for a wide range of projects, including the hit TV series Chesapeake Shores, the upcoming Sonic the Hedgehog film and the dramatic web television series See, produced for Apple TV+.

The 2018 BC Labour Market Outlook projects 16,500 job openings in the motion picture and sound recording industries within 10 years.

For more information, or to apply, visit www.nic.bc.ca/trades.